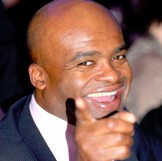 An Olympic medallist who is continuing to inspire others

Kriss is famous for his achievements in athletics where his greatest individual triumph was his Gold Medal in the 1990 European Championships when he also beat David Hemery's 22 year old British Record. In 1992 as three times Olympic medallist, World, European and Commonwealth Champion. Kriss was awarded the MBE by Her Majesty The Queen in her Birthday Honours List in recognition of his services to the country through athletics.

Kriss brings energy, enthusiasm, pride and passion to any event.